de Chazal/Mayer Day celebrations 2017 from the Family in UK. 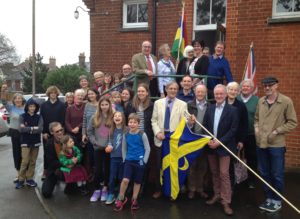 In contrast to last year it was damp and dull but the daffodils were out and the forsythia in flower making a splash of yellow as we each travelled to Guildford.

12th March had arrived at last and de Chazal Day was about to take off as never before. New this year was an invitation issued to The Mayer Family to join us. Irmelin Mayer died in August 2015, she was the wife of Tomi who loved his Family. Their son Toby and family returned to England from the USA, his sisters Juliette and Emily agreed to come so this was very much a de Chazal/Mayer Luncheon.

Françoise Holmes (dtr of George Mayer and Pauline de Chazal) had been widowed and was not as busy as she had been. David de Chazal (Louis’ son) and his wife Helle came from the West Country, it was their first time. Edward and Martha came from Lulworth and Claire from Shoreham. Emily Mayer and John were on their return home from Norway. Most of us live within 30 miles of Guildford so it is not such a long journey. Robin Mayer had run a half marathon in the morning, how did he survive? We were pleased to see Marcus Lynch, a Mayer Cousin, and Laetitia (divorced from Thierry) join us.

The venue was a hall in Guildford www.heritage.charlotteville.co.uk this is a restored workhouse. We were there last year so it was familiar to some of us.

Setting up the tables and showing all our de Chazal material, books, photographs and paintings was a rush but everyone set to and lunch was served. According to tradition our meal was curry and rice. All our guests had provided exciting dishes based on a curry theme. The deserts were just fabulous. One fruit salad was made of mango, pineapple, red pepper, tamarind and pawpaw seeds—that was imaginative.

We really felt that Family had connected, not only to our own but across the de Chazal/Mayer divide.

We would like to do it all over again but next year 12th March falls on a Monday. Perhaps we could celebrate de Chazal day but put aside a day later in the year when we could all get together.

Of course there were people who were not able to come due to work commitments or other reasons. Notable were Robert and Richard our Bolivian cousins, whom we have not met, Rosanna Child, sister to Marcus, Helen Horsler’s daughter who came last year and Françoise Ménagé who was in Mauritius. We missed Caro from Scotland and Angélique from Bournemouth.

Messages of support were received from across the oceans. Among others Hamish in New Zealand, Françoise Ménagé and Jean Pierre in Mauritius, Guido from Bolivia and a nice note from Mercedes in Tucuman home of many de Chazals in Argentina.

We trust that Family across the globe celebrated the names of de Chazal and Mayer and that you felt the warmth of that wide Family.