de Chazal day was celebrated successfully worldwide and we hope that you joined in these festivities with the true spirit of family unity and joy where you are. 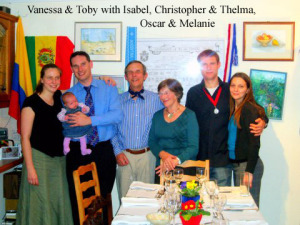 Jean Pierre in the USA, Tessa in Norway, Alex in Singapore, Lucio in Argentina, François in France, Georges in Mauritius, the Dudgeon family in Guatemala, Eliana in Bolivia as well as Andrew and Karin in Italy all sent their greetings to the family in the UK and specially to the party taking place in Guildford Surrey.
As the time zones rolled around the world for twenty four hours the parties continued, and you can be sure that your family was thinking of you.

In Guildford there were 12 adults and Isabel born to Toby and Vanessa on 21st January this year.

The room was brightly decorated, the genealogy of the de Chazals displayed, flags of the nations proudly flying, and the table set for a feast. Helen de Chazal came in time to help Thelma and Christopher ensure that all would be ready on time. Richard and Clemencia brought Vanessa and the baby while Toby, Oscar and Melanie travelled back home from working in London. Mike and Marilyn Fanya travelled from Devon where they had been to see their grandchildren. The group photograph was taken immediately and Cousin Robin arrived soon after.
A toast was drunk to “The de Chazal family Worldwide” and we did not forget to remember those who had gone before, specially The Rev John who was buried just a week ago.

The meal consisted of traditional tasty foods on a Mauritian/Indian theme followed by a pineapple and pomegranate desert, it was all really excellent. Thelma planned and executed this complex menu with considerable skill.

de Chazal Day is special to us all and we would be delighted to see your photographs of the family taken on that day. On 12th March 2008 we will be arranging a special task for you. Keep a watch on your website and see what it could be, you can do it! 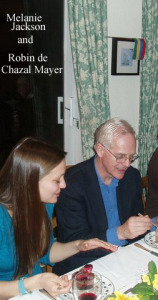 A year has passed since our last news from the UK and we hope that you will find our 2007 open letter just as newsworthy and interesting.

As usual I have shown each persons ascent to one of the fifteen children of Edmond (1809 to 1879). If you would like to follow this on a simplified family tree please let me know.

The 2006 de Chazal Day UK celebration in Ewhurst Surrey was a huge success, Michael and Marilyn Fanya (Marilyn>Ninette>Eveline>Auguste) worked hard on this project. You will have read our report and seen some of the photographs on the web site. As a direct result of that Caroline Smith

[Mado Ardil>Marc>Pierre-Edmond>Lucie, (who married her cousin Edmond)} kindly invited Thelma and I to visit her in Norwich, Norfolk. It is a beautiful area and the weather was fine.

We were happy to meet Caroline’s daughter Rachel and her two grandchildren Edie (6) and Cleo(3). Edie and Cleo now have a sister Annabel Francoise (Known as Bel) who was born 17/09/06. Well done Rachael, we are delighted to see the family grow. Rachel’s husband, Simon Everett, teaches history in a Norwich secondary school.

In September there was an article in The Sunday Telegraph about Michaelmas daisies. It mentioned a sugary pink one named after Anabelle de Chazal>(Jean-Paul>Roger>Roget snr.>Edouard>Auguste). It created quite a lot of excitement and all UK based de Chazals have been informed and their plants ordered. The nursery owner named it so because his daughter is a good friend of Anabelle. They had a big Michaelmas weekend show and Anabelle is sold out, we hope to get our plants in May, they will flower in September 2007 and hopefully our next open letter from UK will include a photograph. The only other plant known to be named after a de Chazal is the “Chazalia” which grows in Mauritius—this was not cultivated but discovered—can anyone give further details? Perhaps if there is a photo it could be put on the website. 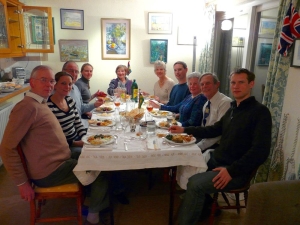 Michaelmas was a special date for Bob de Chazal>[(René>Pierre-Edmond>Lucie,( who married her cousin Edmond)] who was ordained into the Church of England at Michaelmas 1956 and took on the name “John”. He has been a priest for fifty, and deacon, for fifty-seven, years: this is a magnificent achievement. His early career was in the Indian Police in the days of the British Raj. He saw history in the making and had unique experiences which he has recounted in his writings. Iraq is much in the news: John took a post, and met his wife Nancy there, many years ago. I like to think of him as “The Vicar of Baghdad”.

Since writing the above I hear that Bob’s strength is failing him. We wish his family fortitude at this difficult time.

John’s father René worked for much of his life in India and his brother Edgar (who had 13 children and from whom many of us are descended) spent a holiday touring India with René over Christmas 1893. Edgar’s diary which previously was not known to exist has recently been found in England and translated into English. This diary is detailed and quite long, if anyone would like the English version please let me know.

Guy de Moubray >George>Laurence>Lucie,( who married her cousin Edmond) has written a book, “City of Human Memories” ISBN1 84104 128 9. He led an interesting life for twenty five years with the Bank of England; part of the time seconded as personal assistant to Per Jacobsson MD of The International Monetary Fund.

Guy spoke well on the BBC in a well respected programme called “Midweek” telling us of his time in the Intelligence Corps in the Burmese jungle. He used his special talents to enable him to be at the liberation of his parents who were captured in Singapore and incarcerated in one of the infamous camps in that part of the world. He told us of his cookery book (Published privately) which gives recipes and advice for easy entertaining when one is over eighty. All details are in his message on the message board. He has a beautiful home in Suffolk which one can visit. One can see a picture on his website.

Angélique>Maurice>Louis>Gaston>Pierre>Lucie, (who married her cousin Edmond)
has come to Crieff, Perthshire, Scotland from Africa where life can be hard and unpredictable. Her parents still live in Francistown, Botswana. She is working long hours in the hotel gym at present but hopes to work her way through college doing child psychology and using some of her artistic talent. Angélique has to work in UK for several years before she is accepted as a resident. Her grandmother Isobel (wife of Louis, and incidentally has the maiden name “Moubray”) who lives in Harare has had a device like a pacemaker fitted and is much better than she was. Scotland is far away but we hope to see her, and her partner of 3 years Ross, when they come south. Gaston her older brother is battling through a mechanics apprenticeship in Durban, he may join her sometime soon if things get worse in South Africa.

Jacques Poutet’s account of his early life (recently translated into English–see the “portraits” section of the web-site) mentions his cousins, sons of Norman and Yvonne. Norman’s grandson Robin, [>Jano>Yvonne (who married her first cousin Norman, son of Mathilde and George Clifford Mayer) >Berthe] lives in England. He and Jenny have a daughter Jaqueline and two sons, Nick and Andrew. Nick and Vivienne have a daughter born on 14 July 2003 (National Day in France) named Eva Marie de Chazal Mayer so the “de Chazal” name lives on in this family too. 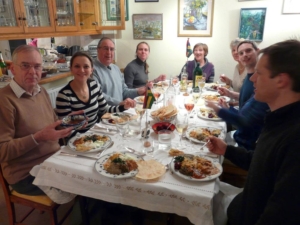 Robin continues his important work for Her Majesty’s Government although he does not travel as much as he used to. He enjoyed the period when GB had the presidency of the EU. He has moved house in anticipation of retirement in a year or two.

Létitia d’Harambure>Anne>Claire>Olga>Regis, tenth child of Edmond de Chazal and Claire Rouillard spent a few weeks in England improving her English, we were pleased to see her in Guildford for a day.

In England we are interested in de Chazals Worldwide. We are concerned at the South American political leanings to the left and we try to follow what goes on.

In France, Sister Marie Judith joined the contemplative order of Benedictines at Sacré Coeur Paris in an impressive ceremony.(see the separate account on the website).We should feel honoured to have a member of the family choose a life in the Work of The Lord.

In Mauritius Georges Robert (Georges>Olga>Edgar>Lucie) was honoured with an Honorary Doctorate from the University. We are proud of him. He is not well at present; we hope he will feel better soon.

The graves of our forebears have been rediscovered; it would be tragic if these were allowed to deteriorate further. Cassis cemetery in Mauritius could become a place of pilgrimage for all de Chazals, uniting the family around this forgotten corner of the World. We hope this project will be taken up with enthusiasm.

UK de Chazals are proud to have contributed to the benefit of The World and this letter would not be complete if we could not once again say that we have The Youngest de Chazal in the World. Vanessa and Toby [(Christopher>Cyril>Edgar>Lucie, (who married her cousin Edmond)] had a beautiful baby daughter on January 21st this year. Her name is Isabel, Mary. Isabel’s title will not long remain unchallenged as Robin’s youngest son Andrew (see above) was married to Catherine in 2006 and they expect a baby in March. What an important baby that will be if he/she is born on International de Chazal Day. Our numbers in England are growing. Freddie and Oliver, our previous youngest de Chazals are flourishing.

We hope that many of us will be in France in July this year and that we reinforce the ties of family that bond us together. We applaud the work done on our behalf by Anne Dauphine de Grivel to organise this ambitious programme.