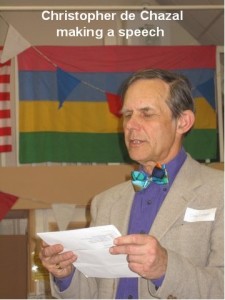 Christopher Cyril de Chazal was born in Hammersmith hospital on 7th April 1939, the day that King Zog was exiled from Albania, as it amused him to remind us.

His maternal grandmother, Edith Crook, was a milliner from Wallingford in Oxfordshire.

His maternal Grandfather, Gustav Anderson, was a skilled Master Tailor from Gothenburg in Sweden who started his own shop in Saville Row and, taking on a partner, founded Anderson and Shephard, still world renowned today.

They lived at 28 St Gabriel’s Road, Cricklewood, in North-West London.

His mother was Mary Anderson, a sociable, talented architect who studied at the Royal Institute of British Architects (RIBA) before winning a scholarship to study landscape architecture in Boston, USA.

His father was a charming Mauritian, Cyril de Chazal, from a large colonial family with interests in the sugar industry. He was one of thirteen siblings and the brother of the Mauritian writer and artist Malcolm de Chazal.

With Christopher still a baby and war imminent in Europe, Cyril and Mary decided to travel around the Cape to the relative safety of Mauritius, a journey which included a year in Madagascar staying with Mayer cousins.

Life inland in Phoenix was far from the Mauritian beach life idyll. The house was small, wooden and full of insects and worms were a constant threat to be treated with castor oil. His mother worked for the government censoring letters of prisoners of war and Cyril worked for the Mauritian Broadcasting Service.

The humid climate disagreed with Mary and when Christopher was six she and Christopher returned to England.

From Cricklewood they moved to Buxted, Sussex, where his mother’s family had moved to escape the Blitz. In 1947 Mary took a job with the Brighton Corporation and they moved to Marine Parade in Brighton, and Christopher attended a boarding school in Seaford.

When Christopher was nine his father joined them and they returned to Mauritius.The white population was small and close-knit and he had many cousins. Living in Curepipe, they had a maid and a cook with a cow and a large family, with whom he would learn to speak Creole.However, he was an only child and his parents’ marriage was breaking down. He didn’t speak French initially and struggled with the formal French education. Despite this, he formed a close attachment to Mauritius and the de Chazal family, and a part of him never left the island.

When he was thirteen he returned to England. Cricklewood became his home, where he lived with his mother and Granny Eddie.He was sent to Kings boarding school in Canterbury. Again, a fish out of water.

Christopher spent holidays with the Littles in Puttenham, Ninette Little being a cousin. It was on Puttenham Common with Marylin that he crashed his bicycle and suffered a ruptured spleen, resulting in the loss of his spleen. But for the quick thinking of Ninette and the expertise of George Little, a tuberculosis specialist, he would have lost his life.

His parents eventually divorced. Cyril remarried to Sheila Weller Poley, a divorcee and society heiress.They were devoted to each other until Cyril’s death in 1983. Sheila was a forceful character who was to be a significant influence on Christopher’s life. The battles between mother and stepmother were a thing of legend!

Mary loved travel, ancient history and architecture and so took Christopher on a number of holidays around Europe where he visited historical sites, including Tunis, Carthage and Athens. He skied in Zermatt with Cyril where he admired the Matterhorn and wished one day to climb it, but never did.

In 1962 Christopher attended a German class where he met Thelma Roberts, a dancer at the Contemporary Dance School. He never did learn German, but Thelma was to become the love of his life.

Christopher, Thelma and their friends made the most of the swinging 60’s London scene, the music and the dancing, centring around their work in Berkeley Square and Thelma’s lodging in Westborne Grove.Christopher worked a number of jobs, including in the glass department of Harrods and as a clerk for the Church Commissioners.

In 1973 Christopher and Thelma moved toPreston, in Lancashire,where he worked for Leyland motors entertaining foreign businessmen. It was in Preston that they were married, and Toby and Oscar were born.

Christopher’s mother had meanwhile moved to Guildford in Surrey, a town that she had previously traveled through and had taken to. In 1976 she helped Christopher and Thelma to buy no. 5 Churchill Road and Christopher took a job locally with the Civil Service. This meant that he could walk to work and spend as much time as possible with the family.

Christopher and Thelma would live in Churchill Road for the next 20 years and it was here that Toby and Oscar would grow up. Thelma became involved in the Church and Christopher ensured that the road was a real community. Summer holidays were spent in Cyril and Sheila’s apartment in Canneswith visits to the islands on Cyril’s little boat ‘Dodo’. Christopher became interested in running and cycling, and he made some good buddies.

After the boys left home Christopher and Thelma moved around the corner to Sydney Road. They had adventures including walking the High Auvergne and touring South America. Christopher took up golf. He became a keen bridge player and a supporter of Guildford City Football Club – ‘Up the City!’.

Throughout, Christopher took a keen interest in local affairs. He was a frequent contributor to the letters column in the Surrey Advertiser. He encouraged local community through his gossip column mailshots. He translated a number of family texts and diaries to English, including the memoirs of the heroic Jacques de Chazal.

Appropriating Mauritian Independence day on 12th March, he started the annual ‘de Chazal day’, when, with the help of Marylin and others he would arrange a grand display of flags and family artifacts and all were invited to share a Mauritian curry feast.He would encourage those around the world to raise a glass to the family.

Towards the end of 2018 Christopher was diagnosed with bile duct cancer following a routine check up. Christopher survived for nearly two years, in which time he said his goodbyes and visited Mauritius one more time. During his final months Christopher never complained. As a Swedenborgian he knew that his spirit would live on after his physical body had failed him, and was not afraid of death. He greeted all with a smile, joking with the doctors that there’s ‘nothing wrong with me!’. He said he wouldn’t fight the cancer, but his spirit would not let him go easily. He lived to the end with dignity, honour, humour and good cheer, a true ‘de Chazal’.