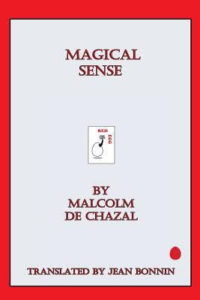 Jean Bonnin eventually settled in Wales and by chance met Yvelaine. This is what he has to say concerning his decision to translate these aphorisms;.

“Malcolm de Chazal was born in Mauritius to French parents and Yvelaine Armstrong was brought up for the first few years of her life on the island of Mauritius.
Yvelaine’s mother Marie-France, who was an artist and poet in her own right, moved to the island during the sixties, a time when the independence movement from the British Empire was in full swing, and when politically everything was in flux.
She loved de Chazal’s work and soon became a very good friend of his. To the extent that it was she who procured many paints and paper for his pictures, persuading him to use better quality products than he had been.
Eventually, due to the closeness of their relationship, de chazal fell in love with Yvelaine’s mother and proposed marriage. Marie-France told him however, that she didn’t see him in that manner and just wished to remain good friends.
Then came the time when Marie-France was planning to return to London. Naturally, on hearing this news, he was upset, but at the same time he was excited. Excited by the possibilities this might present. He immediately brought her many of his paintings—all that wee in his possession at the time. He did this in part as tokens of his gratitude and as a representation of the fondness he felt for her, but also as examples of his work for her to show galleries (which Marie-France did for many years afterwards). de Chazal instructed Marie-France to burn any that she considered to be of inferior standard. Yvelaine indeed remembers seeing as a child the pile of paintings he’d brought around.
This amounted to hundreds of paintings, of course none of which she burnt. And now they constitute what is known as the Armstrong Collection—which, as far as anyone knows, was the largest single collection of Malcolm de Chazal’s work.
Needless to say I accepted Yvelaine’s offer and have spent the last three or four years either translating or thinking about translating the aphorisms, poems and philosophies to be found in Monsieur de Chazal’s Sense Magique. Of course it didn’t take me all that time to translate his work (I naturally had my own writing that I was getting on with in the meantime), but in one sense or another I have lived with his words and his mind for all that time…
This then, is Sense Magique, Magical Sense, Magical Wisdom, Magical Meanings… Magical Sense.

To translate aphorisms to convey the sense and feel of the piece one must inevitable take some liberties. Jean Bonnin states:

“The three-way tug-of –war has been between maintaining the original meaning of the text, taking into account the rhythm of the words and how they fit together musically, and the maintenance of some degree of beauty and poetry that gets as close as possible to the sensation one experiences from reading the script in its original version. The nature of translation necessarily consists of decisions as to what sacrifices one should make and in what areas they should be made, to, in the final translation, arrive at the best approximation to the original as far as the individual translator sees it”

This was the first work on the de Chazal Family, published in 1910

One hundred and twenty five copies were published at the expense of Régis de Chazal who generously gave them to the Family and made them available to those who had an interest. Compiled by René de Chazal, it consisted of a compilation of all the correspondence, before, during and after the French Revolution; principally between François, Pierre and Toussaint.
Few examples of this work have survived the past one hundred years; furthermore we have no idea if the letters forming the basis of the work still exist.

Twenty five copies of this first edition have been reproduced. The printing methods used at the time have been respected. Numbered from one to twenty five they are beautifully bound in leather. To make enquiry about this edition please contact Jean Pierre de Chazal in Mauritius

It would be fitting if we could enter some notes and photographs of René, concerning his life in India and elsewhere on the de Chazal Website, also of his brother Louis.
These notes and documents have been made commercially available, published in 2014 by L’Harmattan France, at 27 Euros, ISBN; 978-2-343-02938-2.under the title

With comments and annotations by Christophe Chabert

Christophe Chabert has reproduced all the original text much enhanced by the initial pages giving the context of the letter writers—their genealogy and connection to the family.
For Chabert it was important that these notes be made available because “it gives an understanding of an époque, a social class, a human adventure—that of colonisation—intimately connecting French and Mauritian history. Following the destinies of individuals, light is shed on the Ancien Regime, the French Revolution, the rise of colonialism and the importance of the sugar industry”.
The transcription of “Notes et Documents” is enhanced by footnotes on almost every page helping the reader along and occasionally adding to the text. Christophe has produced a book complementing the original content with his own comments and notes obtained by painstaking research.
The production of these notes and documents in book form, available to the family and to the public at large, extoling the virtues, exploits, character, vision and even genius of the de Chazal family is to be applauded.
Chabert’s enthusiasm and interest in this family and period of history overcomes some of the negative aspects. Some of it is dry reading, extracts of certificates for example. For any member of the family it is an essential addition to their bookcase.

Éditions de l’Harmattan have recently (November 2006) published a novel by Christophe Chabbert entitled “Dans l’enfer de Montlédier”, a work in which Malcolm de Chazal and his ancestor Francois de Chazal de la Genesté from Mauritius have a leading role. This 35 year old author, literature professor from the South of France wrote his thesis on the life and works of Malcolm de Chazal.

He tells us: “The plot of my novel is driven by the works of Malcolm and in particular “Petrusmok”. I was also fascinated by the character of François de la Genesté which is why I have made him an important figure in my book. You will discover within these pages some things which are true, and others made up to fit the plot: the friendship of François and Hannibal de Laurac and their membership of the same Rosicrutian Lodge, the Holy Grail given by Hannibal to François before his death and taken to Mauritius etc. What is so unexpected is that I made up much of it with only fragments of information available to me at the time. And, very recently being able to read the correspondence of La Genesté, getting into his mind I realised how much I had understood of this tangible man: his generosity, his steadfastness, his sense of duty, all this I perceived through the threads of information I had. There, I do hope with all my heart that you will enjoy the adventures told in this little novel and that it will help you to know more of the illustrious de Chazal family

Translator’s note: Christopher Chabert is now (February2014) an established author. In 2009 “la Belle Clotilde” was published and now we are now looking forward to his new novel written in letter form which will focus to a considerable extent on the de Chazal family.

Christophe chose to write his thesis on the life and works of Malcolm de Chazal and his enduring fascination with the subject and the man has now extended to other important members of that family.

We should be grateful for Christophe’s contribution in enabling the de Chazal name to be better known. His book has not yet appeared but I am confident that the great respect Christophe has for the de Chazal family will enhance their reputation.

His story telling is second to none and for that reason alone we should buy and read his book with a degree of pride and excitement.