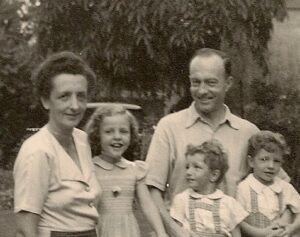 Molly and Louis de Chazal and their children Gilly, Guy and David

Molly Duncan was born 30th October 1910 in Grenada, West Indies, eldest of 4 children.  The family moved to Edinburgh in 1915 where she went to school, excelling both at sports (tennis, hockey, and golf with a 4 handicap) and at academics.  Molly would have gone to university, but a reversal in family fortunes required her to become the breadwinner.  She took on 3 jobs, one of which resulted in her becoming an outstanding bridge player.

Molly de Chazal (She was about 42)

On the outbreak of war Molly was commissioned into the Army’s Auxiliary Transport Service (ATS) and rose to the rank of Major (recommended for Lieutenant Colonel).  Posted to India, in 1945 she met Major Louis de Chazal.  It was a coup de foudre:  they became engaged and married within a month, on 10th July 1945 in Delhi Cathedral.  After the war, Louis resumed his work with Reckitt & Colman in Calcutta.  Children soon followed (Gillian 1946, and twins Guy & David 1947).  Molly not only supported Louis’ career, but also became All India Ladies’ Champion at Golf, and an exceptionally fine tennis player.

In 1953 the family left India for Reckitt & Colman’s HQ in Hull.  Molly continued to be the focal point of the family in their East Riding of Yorkshire home, a pillar of the community, and winner of many sporting & bridge trophies.  Following Louis’ death in 1981, Molly moved to London.  She remained the centre of a wide social circle and supported of a multitude of good causes.  Molly de Chazal died 15 years to the day after her beloved Louis, on 19th February 1996.