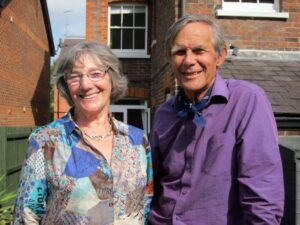 We mourn the death of Christopher de Chazal, who passed away on the 16 July 2020.

Difficult to talk about Christopher, he was such a character.  I have tried to write a few words about him

Christopher was born in England on the  7April 1939, he was the son of my uncle Cyril de Chazal , and of his wife Mary Anderson.

When war broke in the same year, Oncle Cyril lost his job in England, and he, along with tante Mary and Christopher, took a boat in order to come to our waters.  The family spent a year or two in Madagascar, and then came to Mauritius.

After the end of the war, tante Mary wanted badly to see her family and she and Christopher went back to England, whilst Oncle Cyril stayed in Mauritius to take charge of the Mauritius Broadcasting Service.

In 1948 the family was reunited in Mauritius, and lived in a house near Villa Sylvain, my house, just across the road.  During those years I developed a friendship with Christopher.  We went together to various activities in the English speaking world, and I was often with him at the seaside on Sundays and spent great holidays there with our cousins, sons of OncleDick .

In 1952 Christopher left for England with his parents in order to go to school there, at Canterbury.  He did not like his school days, as he was not particularly academic and was away from his family, he was nostalgic about Mauritius.

When I went to England in 1959 to study, tante Mary, who had separated from Oncle Cyril, and Mrs. Anderson, Christopher’s grandmother, welcomed me very warmly for two months.  This afforded me the opportunity of getting to know English life and to renew my friendship with Christopher.  Through him I met Ninette Little, the mother of Marylin Fanya.

Christopher lived a few years in the north, he married Thelma Roberts  and they had 2 boys, Toby and Oscar.

He then settled in Guildford, and we saw him a few years later in the house he lived in until his death, and have been regular visitors since on each occasion we were in England.  His love of Mauritius was indefectible.  He had dodos of all sizes in his garden, and a beautiful Mauritian flag hung proudly next to the Chazal flag.

Christopher and Thelma were very welcoming, they loved the family and were happy to receive them.  Christopher instituted a Chazal day on the 12 March, Mauritius Independence Day, and each year organised a party inviting the extended Chazal family.  Our son Andre attended the last party at Christopher’s this year. Each time we travelled to England we visited them, and remember Christopher’s warm welcome at the station, with his little hat and scarf round his neck. They were very kind to our son Patrice and replaced us when Patrice graduated at Portsmouth University.

Christopher was very fond of the large Chazal family.  He kept in touch with cousins all over the world.  He had many family trees, and was a keen participant of all Chazfests in all parts of the world.  He did some translations of Chazal texts, at the request of our cousin Jean Pierre

Thelma and he lived very simply, enjoying outdoors, Christopher loved jogging and golf and they loved growing all sorts of vegetables in their ‘plot’ and very special flowers in their small garden.  For a long time they had no mobile phones, and communicated through walky-talky.  Christopher had a special gift of communicating with everyone he met, when he was in Mauritius, he talked to the workers in the field, the Chinese shopkeeper in Cap Malheureux, and an old friend of ours, etc

Christopher came back twice to Mauritius.  The first time in 1990with Thelma and the boys, and than last year with Thelma and a group of friends.  Even if he knew he had cancer, he made the most of his holiday.  He even joined us with his friends for a walk in a hunting ground (chassé) .

I would also mention that he was very fond of Oncle Cyril’s second wife, Sheila. He and his family spent great holidays in Cannes, where as a family they enjoyed a  happy and relaxed atmosphere. They welcomed Sheila each time she came through Guildford.

The last two years as from the time he had cancer up to his death, Christopher was very lucid facing his death.

He and Thelma were very close and living in serenity till the end.  Christopher died on the 16th July, serenely at home with Thelma and his children near him.

His last Christmas with his family

Surrounded by his wife Thelma, and his two sons Toby and Oscar, Christopher de Chazal has just left us on July 16, 2020.

He left a great void in the de Chazal family but his memory will forever live on. He created “ de Chazal Day” and ensured its celebration every year on March 12. He has encouraged and supported me over the last twenty years in the development and maintenance of the family website. He was actively involved in the translations into English of the texts published on the website, the genealogical books and the personal journals.

Christopher we already miss your enthusiasm, your creativity, your joy of living, your sense of family, your friendship and your charisma.

The passing of Christopher de Chazal on 16th July is a source of great sadness. He took such immense comfort throughout his illness from the wonderful care of his wife Thelma, their sons Toby and Oscar and indeed the messages from the whole of the wider family and friends. This meant so much to him.

Christopher, a prominent believer in the writings of the New Church, has been an outstanding force of energy as a husband, father, grand parent and all his life unfailingly binding together with enthusiasm and love so much of the wider de Chazal family. Forever and tirelessly reaching out. He will be greatly missed for his warmth, his engaging and welcoming disposition.

We feel a sense of real loss and will remember with the utmost affection his uniquely wonderful qualities. These will guide us.

Farewell dear friend. I was so very fond of him. He had been my father’s best man in 1957. I met him in Mauritius at George and Pauline Mayer’s one sunny day. He was sporting his trademark cravate and his hair falling upon his face. I was 19, maybe. He was absolutely charming, and fun, and attentive, and spoke with a soft and deep voice. I was due to go to London for trip, and he invited me to stay. I did so, meeting Oscar and Toby, his lovely sons. It was fun. Another year I spent a Christmas with them and all. Thelma had inherited a collection of jazz cassettes, which they generously gave me, and which I still have to this day. The last time I saw him was at the 2012 Chazfest in Durban. What a story! Thelma had herniated a disc, and was suffering all hell. But here she was, braving the pain to be with family. I drove her to the nearest hospital, and we managed to convince Christopher, who had, like a true Chazal, a mind of his own, to go back home. He was just so wonderful!

My condolences to your beautiful family… Ill always treasure the great time I spent in Guilford with you.

Oh no.. so sad to hear about this…

He was a lovely man. So sorry to hear this.

Voice of Christopher in a video the day of his funeral