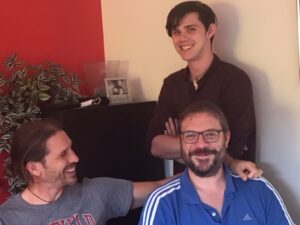 Message de Mathilde Spall, sa mère :
It is with great sadness that Peter and I have to let you know that our dear youngest child, Philip, (aged 39, a lovely gentle giant) died over the weekend at home in his house in Faversham.  We were away in Bristol with Kat, and his boss texted to say he hadn’t turned up for work, nor was answering his phone.  We got a friend to call round to his house and she found him lying dead on the bathroom floor.

You can imagine how broken we all feel at the moment.  He lived alone so there will have to be a post-mortem and it will be several weeks before they release his body.  Additionally, we have to sort out his house and all associated legal paraphernalia.

We would be grateful if you could keep us in your hearts and prayers, especially for his 17 year old son Cain.