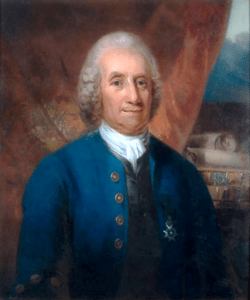 The following was summarized from the chapter, Swedenborg: Man Beyond Measure, in Bruce Hendersons book, Window to Eternity, as a pamphlet for the Bryn Athyn Cathedral, where it is very popular with visitors. It is available for other Church societies and anyone else interested.

He is not to be measured by whole colleges of ordinary scholars.”

American poet Edwin Markham said: “There is no doubt that Swedenborg was one of the greatest intellects that has appeared upon the planet . . . the wisest man in millions.”

To Helen Keller he was “one of the noblest champions Christianity has ever known.”

Who was this man?

During his lifetime, Swedenborg’s contributions to science, philosophy and theology were well known in European intellectual circles, including Kant, Wesley, Goethe, Rousseau and Voltaire.

He was a member of the Swedish House of Nobles, an economist, inventor and scholar. All before the most remarkable period of his life: as a revelator and “servant of the Lord.”

This unique spiritual experience separated him from all other renowned men. Between 1720 and 1745 he wrote 20 volumes on civil, scientific and philosophical subjects. Then, at age 57 and continuing for the last 27 years of his life, he wrote more than 30 volumes of closely reasoned theology, which he claimed came directly from God. (This church, and others like it throughout the world, is devoted to “the new Christianity” of this revelation. It emphasizes acknowledging the Lord and His Word, following His Commandments, and living a life of use and charity.)

Many leading thinkers in the 19th century also saw him as a man of exceptional insight, including Abraham Lincoln, William Blake, Robert and Elizabeth Barrett Browning, Samuel Taylor Coleridge and John Greenleaf Whittier.

Emanuel Swedenborg was born in Stockholm, Sweden, January 29, 1688, to Jesper and Sara Swedberg – an intensely religious family. Jesper was professor of theology at the University of Uppsala. He later became bishop of Skara, making him a nobleman, and the family name was changed to Swedenborg.

The Swedenborg home was genteel and reverent. Even though Emanuel’s mother died when he was 8, her soft nature influenced him throughout his life. Family discussions of religious subjects helped him develop his own philosophy. He said of his youth: “I was constantly engaged in thought upon God, salvation, and the spiritual diseases of men.”

At age 11, he entered Uppsala University – not unusual for a boy of high intellectual promise. He majored in philosophy, which included science and mathematics, and took courses in law, theology and medicine.

Most of his instruction was in Latin; he even wrote poetry in Latin for relaxation. He also learned Greek, Hebrew, English, Dutch, French and Italian, studied music on his own and filled in for the church organist. He was versatile, curious and practical.

He completed his formal studies at 21 and devoted the next 35 years to self-directed education. He learned physics and astronomy, was skilled in watch­making, bookbinding, cabinet work, engraving and lens grinding, and studied cosmology, mathematics, anatomy, physiology, economics, metallurgy, mineralogy, geology, mine engineering and chemistry.

He made models of a glider and a submarine, hundreds of years before anyone else saw the possibilities, and designed a prototype phonograph, a machine gun and a fire extinguisher.

He plunged into anatomy with the same curiosity and initiative. This was still a primitive science but he not only came closer to understanding the functions of heart and lungs, blood and oxygen than anyone to that date, but was ahead of his time in many other areas of anatomical research.

Throughout all of this intense study and accomplishment, he never forgot the advice of his father: “I beg you most earnestly that you will fear and love God above all else, for without this fear of God all other training, all study, all learning is of no account.”

His life was not spent indulging personal whims, however. He was devoted to public service, the Swedish government and his country. At 28 he was appointed by King Charles XII as extraordinary assessor in the Royal Board of Mines. His public career included 50 years of service in the House of Nobles and devotion to the welfare of his country.

All of his work rested on the assumption that divine force underlies all matter. He was not satisfied with purely material explanations of the universe. This led him to study the relationship between the finite and infinite, with the human soul as the link between God and man.

At age 57, he felt he had gone as far as he could in explaining the mysteries of human existence based on science. He was about to begin a unique phase of his life that would take him deeper into understanding these mysteries than he ever could have imagined.

It began in 1744 with dreams and visions that left him both fearful and exhilarated. He kept a careful record of what he experienced and how he felt. It was a disquieting period, which he did not yet understand, so he kept the dreams to himself.

Swedenborg believed he had been called by God to transmit a new revelation to the world, and devoted himself to that service for the rest of his life. He began a two-year study of the Bible, writing thousands of pages of notes and a complete index for his later theological works. And he perfected his Hebrew and Greek to study the Bible in original texts.

Throughout this spiritual mission, he said he talked almost daily with spirits while living a normal life on earth and stated: “The Lord in His divine mercy has granted me the opportunity for several years now . . . to keep company with spirits and angels, to hear them talking, and to speak with them in return. Consequently I have been able to see and hear the most amazing things in the other life, which have never before come into people’s awareness or thought.”

He insisted that he was not dreaming but fully awake to what he saw and heard in the spiritual world, could reflect on his experiences with real understanding, and that at all times he was taught by the Lord alone – through angels, but not by angels.

Swedenborg is often identified as a “scientist, philosopher and mystic.” But he cannot be so simply classified, because his experience was unique. It shares little with the visions of self-styled seers, and he never encouraged a mystical way of life. His works are an intricate presentation of doctrine, not personal philosophy.

He did not rush into print the moment he felt called, nor attract attention to himself. He waited until he had three years of experience in the spiritual world before he began to write. His first and most exhaustive theological study, Secrets of Heaven (Arcana Coelestia), written in 1748, is a verse-by-verse analysis of the spiritual meaning of Genesis and Exodus.

He published his books anonymously, seeking no credit – even among friends – spending a lot of his own money and giving them as gifts to clergymen, universities and libraries.

He lived a normal life and never married, leaving him free for his studies. Friends and acquaintances noticed nothing unusual about his life.

He had no command to establish a church, although he assumed this revelation would be the basis for a new church.

When he was 80, a friend wrote: “Someone might think that Swedenborg was eccentric and whimsical, but the very reverse was the case. He was very easy and pleasant in company, talked on every subject that came up, accommodating himself to the ideas of the company, and never speaking of his own views unless he was asked about them.”

Engrossed in his crowning work, True Christian Religion, or True Christianity, at age 82 he made his final journey to complete its publication. He must have felt he would not return, for he made farewell calls on friends, arranged a pension for his faithful house­ keeper, and settled his estate.

He had predicted six months before his death that he would enter the spiritual world on March 29, 1772. He awoke from a long sleep that day and ask his landlady for the time. When she told him it was five o’clock, he said, “I thank you. God bless you.” Then he gently sighed and died.

In the last month of his life several friends urged him to make a final statement about the truth of the new revelation. He answered, “I have written nothing but the truth, as you will have more and more confirmed to you all the days of your life, provided you keep close to the Lord and serve Him alone by shunning evils of all kinds as sins against Him and diligently searching His Word, which bears incontestable witness to the truth of the doctrines I have delivered to the world.”

To another friend shortly before he died he said: “As truly as you see me before your eyes, so true is everything that I have written; and I could have said more had it been permitted. When you enter eternity you will see everything, and then you and I will have much to talk about.”

Adapted from “Swedenborg: Man Beyond Measure” in the book “Window to Eternity” by Bruce Henderson.

This website uses cookies to improve your experience while you navigate through the website. Out of these, the cookies that are categorized as necessary are stored on your browser as they are essential for the working of basic functionalities of the website. We also use third-party cookies that help us analyze and understand how you use this website. These cookies will be stored in your browser only with your consent. You also have the option to opt-out of these cookies. But opting out of some of these cookies may affect your browsing experience.
Necessary Always Enabled
Necessary cookies are absolutely essential for the website to function properly. These cookies ensure basic functionalities and security features of the website, anonymously.
Functional
Functional cookies help to perform certain functionalities like sharing the content of the website on social media platforms, collect feedbacks, and other third-party features.
Performance
Performance cookies are used to understand and analyze the key performance indexes of the website which helps in delivering a better user experience for the visitors.
Analytics
Analytical cookies are used to understand how visitors interact with the website. These cookies help provide information on metrics the number of visitors, bounce rate, traffic source, etc.
Advertisement
Advertisement cookies are used to provide visitors with relevant ads and marketing campaigns. These cookies track visitors across websites and collect information to provide customized ads.
Others
Other uncategorized cookies are those that are being analyzed and have not been classified into a category as yet.
SAVE & ACCEPT