This year in honour of the fact that the brand new genealogy of the Mayer Family has been produced by our friend Patrick Harel in Mauritius we are celebrating with the Mayer family. 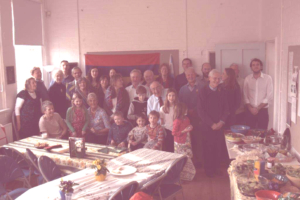 If we have your Email you will recognise this message and be wondering how we managed to get 35 attendees and how was our Luncheon.

It was a combination of hard work, co-operation and enthusiasm from the de Chazal/Mayer Families that made this occasion a great success. 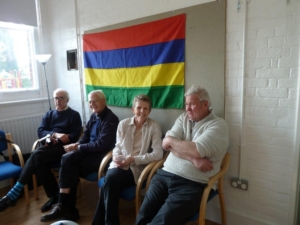 “The role of History is to make the past live again; to bring it into the present and so join new generations to the old.  History itself establishes and defines, the character, tendencies and in a word, the essence of Individuals and Families

The History of our families has brought us together, we cannot deny History and we hope that History will take us into new generations, new fields and new ideas, but nevertheless allow us to appreciate the present among people of the same blood, with a similar historical backdrop. 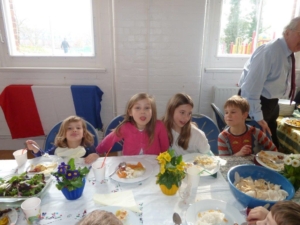 Everyone had been given good warning that this year de Chazal Day 12th March would fall on a Saturday and it was essential that they all attend.

Marilyn Fanya went as far as altering her holiday dates. She bravely took on the organising of all the catering whereas I took on all the Emailing and contacting family members.

When one starts on a project such as this one wonders where they will come from but in fact there are lots of British with de Chazal/Mayer blood running through their veins. Many show no interest which is a shame, they deny their roots, and as the illustrious ‘Duc’ would say they deny History.

The sun came out and the children played safely in the playground just outside. The venue is was a restored 19thC. work-house for vagrants. The individual cells in their original condition may be visited but we were in the Master’s House. It is locally called “The Spike” because the vagrants were required to pay for their keep by unravelling rope from the sailing ships with a ‘marlin spike’ as an alternative to breaking rocks. 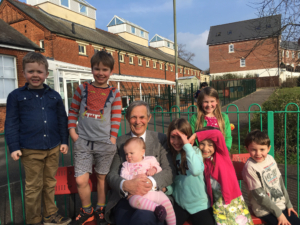 The de Chazal display naturally showed a large array of books and papers. Helen, brought a beautiful painting of Ménil-aux-Roses (built by Pierre Edmond & Lucie) which is I feel a Family Treasure. It appears as one of items at the very beginning of the website (on the nineteenth button, see also Family Dwellings section), Edmond and Lucie also appear in this gallery. Helen also brought a photograph of her Grandparents Oncle René and Tante Dora (also Grandparents of Gilly & Edward who were present at the luncheon) – taken I think on their wedding day in Valcreuse Switzerland. Christiane Galland who ably organised the reunion last year should try to verify this; it may be the only internal photo of this lovely home which is now being restored by the Lausanne Council. If confirmed it will help them in their restoration. Thank you Helen for your contributions.

Firstly a Latin text written by Pierre (1720-1812) before he bought La Sablonnière. This has been found by Jean Pierre on Ebay! A monastery had disbanded and sold its entire library which now appears on the Web. I have been invited to translate this philosophical text but am having difficulty deciphering the original text. Can anyone help? 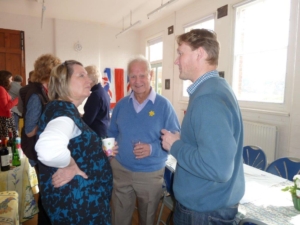 Jacques de Chazal is a strong, healthy Frenchman, but he is not on Email. He has written the first volume of his memoirs. What a life he has led! Born in 1920, after a difficult but privileged youth he escaped Vichy France, fought and survived the Second World War, and went on to be a purser on trans-Atlantic flights progressing to Indo-China. The translation of his book into English became available on 10th March and by coincidence he received it on de Chazal Day. I can assure you it is emotional, exciting and a great read. Please ask and I will pass on the details.

Finally the Flag: The definitive de Chazal Flag approved by Jean Pierre and Tristan has at last seen the light of day. We were the first to see and make use of our very own flag. Would you fly this flag with pride? A picture will surely appear here, please ask and maybe you could become a vexillologist (having an interest in flags) and fly the de Chazal Flag.

On the subject of flags we must mention that the Mauritian, Argentine and Bolivian Flags all had pride of place. The French flag seemed to be missing or did I not see it? Please don’t tell Tristan, he may be displeased that our country of origin was not fairly represented. 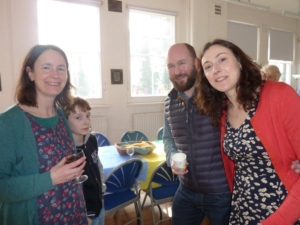 On the board: The Family Tree, a list of attendees, a sheet of who the attendees were and how they are related. A list of attendees may appear at the end of this text, but hopefully enough photos were taken to show who was there. Absentees are just as important as attendees so please study the lists which may follow. Goodwill messages were reproduced. 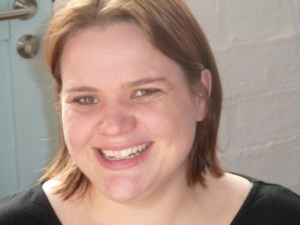 Africa and now lives in Bournemouth.  Angélique has no direct relatives in UK and she saw her Mum at her wedding some years ago, but has not seen her father for ten years. We hope this connection with her family was special for her and she will remain in contact.

We were excited last year to learn of our Bolivian cousins Richard and Robert living in Stratford on Avon but despite telling them to note their diaries they failed us!

Let’s bring in the Mayers. On the board: A genealogy of Ralph George Mayer who married Tante Rita, showing their descendants specially their son Tomi and his children, Juliette(London) Emily(Norfolk) and Toby (soon to come to Guildford!).  Tomi Mayer’s chutney recipe, how many will try it? Marcus Lynch (Tomi’s nephew) and his sister Rossana could not be with us. 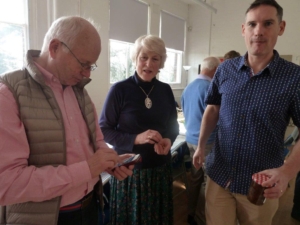 At the very last minute Richard (Denis’ son) who works in London by good fortune came across John Mayer. John has a brother Jérôme living in Reading only 50 kilometres from Guildford, we hope to see him soon. Cousin Robin also came to represent the Mayers.

Questions remain—how many poppadum were there? Marilyn did a superb job in marshalling the troops to provide food. Mike Fanya proposed the toast to The Family. Karin kindly brought lots of wine. Chris worked tirelessly in the kitchen and Nicky wielded the vacuum like a professional.

Did we make History? Perhaps not, but the Grand ‘Duc’ would be proud of us—we are keeping History alive, allowing it to flourish and perhaps moving it on a bit.

Please study the associated document to see how all our guests are related and connected.

All relationships have been taken back to the children of Antoine Edmond and Claire Rouillard from whom we are all descended,

“Grandmère”, Sheila Peers: my stepmother now nearer 100 than 90, in Cyprus

Laetitia & daughters Zaskia and Bianca (Laetitia divorced from Thierry {Thierry>Henri> Raymond >Edouard>Auguste}): her two daughters are abroad and she had to work

Richard and Robert (Bolivia) living in Stratford in Avon: abroad & on a course

Toby Mayer and Family: in USA but shortly moving to Guildford

Jack Smith of the Ardill family, living in London