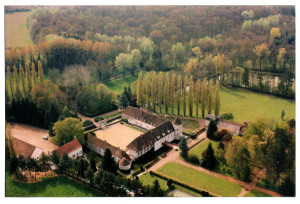 “LA SABLONNIÈRE”
Recently restored and one of the most beautiful Chateau

The Gien situated where nature is so pleasant in its diversity, between The Loire, The Berry, The Sologne, Gatinais and Puisaye, has, over the centuries, seen many homes built that enhance the beauty of the country: feudal manor houses of the XIth and XIIth centuries, (Assay, Arrabloy, Autry), castles, (Gien, Sully-sur-Loire, Saint Brisson, La Bussière), to which were added well known hunting lodges and recently many holiday homes of all descriptions.

Often however, these are old châteaux or old buildings that have been rebuilt or restored.

There are many of these residences, and today we introduce one of the most remarkable: the châteaux of La Sablonnière which seems to have originated in the XVIIth or XVIIIth century and can be found a few kilometres from Bonny-sur-Loire.

In 1600 La Sablonnière was owned by Gabriel Pellault, King’s Councillor and President of the The Gien Elected Council; in 1622 it belonged to Guy Dufaur, Lord of the Chatelaines and grounds of Courselles-le-Roy and Pierrefitte.
In 1630, the property fell into the ownership of Nicholas Desnots, King’s Councillor and Controller of his properties in Picardy, and in 1651, to Jaques Charrier, an Equerry. La Sablonnière continued to go from hand to hand. In 1655, it was acquired by Pierre de Chaludet, Lord of Neuvey and The Lande of Bonny, King’s Councillor and Clerk of Works for his buildings, Chancellor of the Exchequer, and Treasurer of the finances of the larger area of Orléans.
In 1670, the owner of the property was Suzanne de Rochouart, widow of Pierre de Chaludet, who passed on her rights to Guillaume de Chaludet, who, in his turn passed them onto Antoine de Troussseboy .
In 1714, his widow sold La Sablonnière to Antoine de Rancout and in 1759 we find Pierre de Chazal as the new owner. It would remain in his
family for almost a century.
To afford La Sablonnière Pierre de Chazal sold his home Le Morandin in The Forez.At the time he also bought the neighbouring lands of Landres, for 30,000 livres and those of Covignons and Coudrai for a similar sum. Thus the overall cost of La Sablonnière rose to 140,000 livres.
Pierre de Chazal was councillor in the appeal court and a grandee of the central council in Paris.
He lived in Paris as well as La Sablonnière and became Colonel-in-Chief of the Bonny Grenadiers during the revolution until the day his Chateau was burnt down. During these troubled times over a period of eighteen months, he had, at his own cost, fed the people of the district. In 1800 he wrote “My beautiful Sablonnière is but four walls ruined wherever one looks”, however in 1804 he says “I have repaired it as best I can”.
At his death in 1814 he left La Sablonnière to his nephew Charles de Chazal who lived in Mauritius where he had obtained numerous concessions on sugar plantations. It is interesting to note that his mother, Jaquette Corday, was related to Charlotte Corday who assassinated Marat. Charles de Chazal, after an interminable voyage during which his wife died, took possession of La Sablonnière where he arrived with his six daughters in December 1815. He died in 1829. 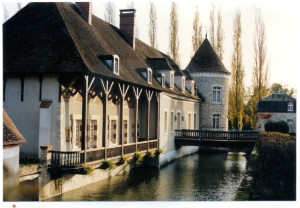 La Sablonnière was owned by the Beaupin family, from Bonny-sur-Loire, when it was bought about twelve years ago by Mr Dechamboux, who undertook considerable restoration work.
It was then that the first floor, which had been built in the 19th Century, was completely renovated and the moat cleaned out, fed today by clear, limpid waters. The old apartments were enlarged and modernised.
In 1968 Mr Dechamboux sold La Sablonnière to Mr Bertrand the present owner, who has given the “Journal de Gien” a warm welcome making this report possible.
The entrance of the property draws you in with its forged gateway, its lawns, its massive medieval-looking towers, and the light walls that plunge their foundations into the moat where swans float…
Around the large buildings one can admire modern additions such as a tennis court, heated swimming pool and a rose garden with splendid colourful blooms.
Inside there are grand rooms which harmonise with the old building, of note, the Louis V111 dining room with its huge chimneys, pewter and copper ware and cast iron grills.
Ten bedrooms are furnished in different styles. Mrs Bertrand has personally seen to the decoration of each room with clear vision and taste.
The gardens and parkland are well cared for and create a wonderful framework to the Chateau.
La Sablonnière has also been conceived as a location for hunting. A small detail: a hide overlooks a lake of about a hectare in area where they breed about 500 wild ducks.
Finally at the end of a wing of the principal building, they are restoring a XVIth. Century chapel which having been abandoned for so long was in a very poor condition
So it is that that this old dwelling, little by little, is returning to its original state. 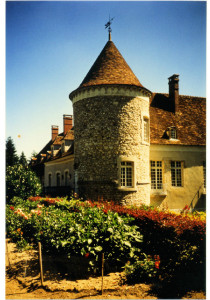 Chateau are the jewel in the crown of our countryside, they maintain, perpetuate and embellish the admirable work of the past.
“Imagine” wrote Maurice Barrès “France with neither church nor chateau. These are the most visual, physical and moral aspects of our land. 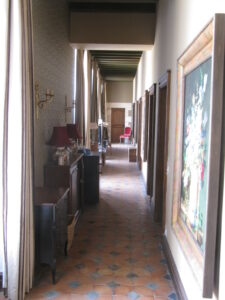 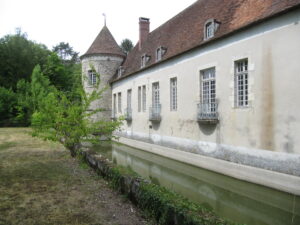 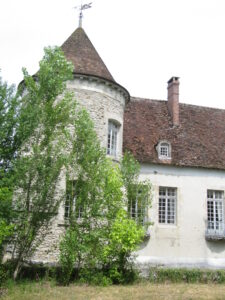 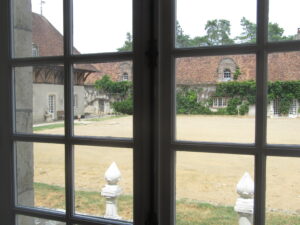 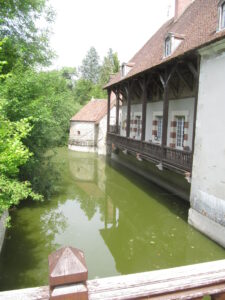 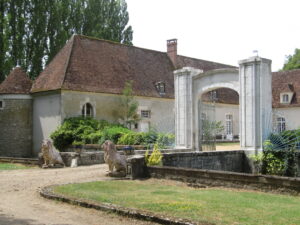 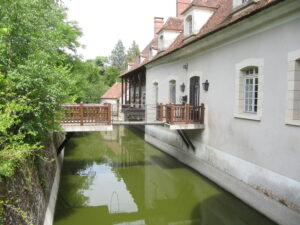 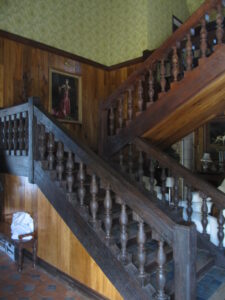 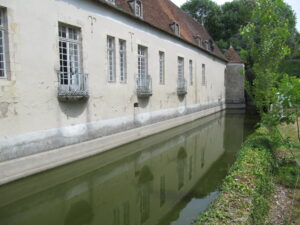 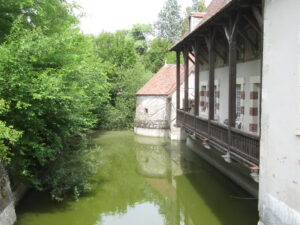