Frank Mayer ( The most Chazal than Chazal) 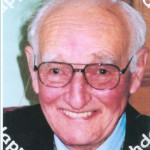 Francis Edward de Chazal (Frank) MAYER
I was born in 1924 in Lausanne Switzerland, Where my father was minister of the New Church of Jerusalem ( the Swedenborg cult). Both my parents were de Chazal descendents. My mother, Yvonne was the daughter of Evenor and Grand daughter of Edmond. My father, Norman Mayer, was the son of Berthe the daughter of Edmond and sister of Evenor. He was also the grand son of Mathilde the sister of Edmond. Thus I was the product of three intermarriages between first cousins.
By the age of five the family moved to France as my father took up the ministry in Paris. There I did all my schooling; fluent in French I like to think I was fairly clever at the time.
In June 1940, aged 16 1/2. the family fled from Paris two days before its German occupation. My parents traveled by whatever transport they could get which was mostly on their two feet. Jaques and I traveled separately on our bicycles carrying tenting equipment. We believed the German advance would be stopped at the Loire.
By the time the armistice was signed, we had reached the foot hills of the Massif Central. Believing the war was lost Jaques and I decided to return home. The German army was surprisingly well behaved at the time. they always paid for their goods in the shops and no soldier would retain a seat in the Metro if there was a single female or old man left standing!
Grat aunt Marguerite did not approve our return. She instructed us to seek protection from the Swiss and American Embassies and failing that to make every effort to move to the unoccupied part o f France. This we did cossing the demarcation line the day before its closure. Reunited with my parents, the family moved to Sanary sur mer, where a Swiss family member of our cult gave us shelter. My father and I left for England in April 1941 reaching Glascow in July after crossing Spain then via Lisbon and Gibraltar.
I then volunteered for the Royal Air Force and was accepted for training as Navigator. Became operational in Bomber command in 1944 I do not like to recall I was contibuting to the slaughter of countless women and children. Shot down bi a night fighter I spent the last few months as a prisoner of War. After victory in Europe I joined Transport Command in India where I ferried released POWs on their way back to England. the poor chaps were in a very sorry state.
After my demobilisation, fired by the need for reconstruction to make our land fit for heroes I trained as a Civil Engineer. First research into the quality of road materials; then various jobs in the Mininstry of Transport ending up as Manager of multi pounds projects for the construction of sections of the Motorway network as well as other major by passes. Retired aged 64.
Of my brothers of the same pedigree we have:
the eldest Polo born in England but naturalised French. He fought in the French army ay Dunkirk, then returning to France for the last few days of the war. He became an unqualified electronic engineer working in the development of television.
Jano born in France elected to retain British nationality. He joined the Army and served in Norway the Middle East and finally Italy where he was badly wounded in the legs. He became a school teacher.
George ( Manu) in the RAF shot down over Germany spent some 3 years as a POW. Trained and practiced as a dentist; he achieved the distinction of Mayor of Bath.
Jaques stayed in France and became a civil internee in Paris. After the liberation came to England. joine the army and seved mostly in the far East. He worked for the Ordnance Survey and then Michelin. He never married.
I met my Sheila at the university of Nottingham and married her whilst still a student in 1949. A devoted mother she raised our four children to become fine upstanding members of the community. I am proud of them. In her quiet way she was quite outstanding and through the years I increasingly relied on her for everything. Sadly she died a few months after our golden anniversary. I am still surprised that, somehow I managed to cope without her.