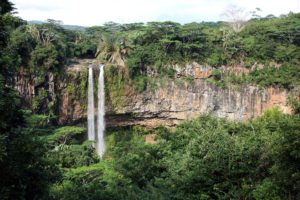 I would like to say, before starting the report proper, that all opinions and comments are entirely my own. Please forgive me if I have forgotten anything, there was so much going on!

We arrived to St. Antoine on a gorgeous early evening. The house was as lovely as ever and sported two huge banners with the de Chazal coat of arms and the dates of the meeting.

We were welcomed by several members of the committee and issued with badges bearing our names. Suzanne de Chazal has always maintained that she came from the yellow branch of the family, as she is not very daring. To our delight, we were from the yellow branch of the family – the descendants had been colour coded to their ancestors, e.g. the Evenors were dark blue, the Augustes scarlet and the Pierre-Edmond/Lucie yellow!

We were then met and welcomed by Francois de Grivel whose house St. Antoine now is. I had never realised how attractive my left bosom was – people would peer at it with pleasure and interest, then realise who that grey haired, old woman was -not that I felt my age. It was very odd to meet young men with whom I had flirted as a girl now looking as grizzled and wrinkled as myself!

About 150 people attended this party – we were from all branches of the family, of all shapes, sizes and ages. It was wonderful. Mother was in her element, at her best, surrounded by her beloved family [close and not-so close], in a place which she had loved in her youth. It was heart-warming to see her and her generation enjoying the attention of the “youth”.

We had ample time to mix, eat and drink. We were able to look at the admirable exhibition of artefacts, books and pictures set out in the dining room, and also take a quick glance at Alain’s exhaustive and vast family tree on the veranda. What came into my mind were a few letters of Pierre-Edmond’s in the late 1850s describing the large dining room table sitting 50 which his uncle Edmond had taken delivery, and the ball at which he had waltzed and polka-ed round the veranda with Lucie “still in her little girls’ pantaloons”. How astonished they would all have been to see us assembled there to honour them and theirs!

After a time, we were asked to gather around the main veranda for a few welcoming words. Francois was the first to speak and welcomed us all to the parties, etc. Then Jean-Pierre de Chazal, the family elder, said a few words welcoming us to the Chazfest in Mauritius but also inviting us all to the one in Charlotte next year. The transcript of his talk is on this website. Finally, Tristan gave us the very early history of the family, when our ancestor still lived in France. We were then invited to carry on with the party. Drinks flowed, food abounded and the atmosphere was lovely.

After a very early start, about 75 of us arrived at Clarisse House – Clary by any other name. It has had a chequered history, in its the last incarnations it has been the residence of the Colonial Secretary, then of the Prime Minister, and now it is being re-furbished as a museum of Mauritian life. What a beautiful house – quite different to St. Antoine, but with a wonderful garden at the front, sloping lawns edged by some very big and lovely “banyan” and “longane” trees, amongst others.

We were permitted to roam through the house, into the gardens and, generally, have a good nose around. I was impressed at how well it had been kept. They are trying to get all the furniture of the period back and to put the house into the state it would have been at the turn of the last century. I hope they succeed. Many of the curators and attendants asked us a lot of questions about the family and what they would have had, done and said in the house’s early days. 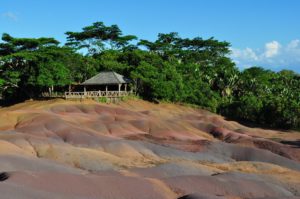 The prime Minister was unfortunately unable to welcome us as he had originally wished, but we were received by his minister of Tourism. She gave us a speech of welcome which was answered by one of the committee. We then had the first of several talks about the family. This one was mostly about Claire Rouillard, Edmond’s widow, and her family when they moved from St. Antoine to Vacoas.

Our next stop was after a lovely drive through the back of Henrietta – which is the name now given to the old Moon concessions. We stopped at the top of a hill overlooking the Black River Gorges and Tamarin with stunning views. We were told that this was the site of “Le Mondrain” where Toussaint Antoine had lived, and where Matthew Flinders would rush out to see if he could spy a ship bearing the white flag of truce which would enable him to return home. We were also treated to a talk about Toussaint but particularly Maley, her interest in botanical plants and her paintings, about Toussaint and his farming – imagine oats and barley growing on the slopes, of mulberry trees cultivated to feed the silk worms, of coffee trees, nutmegs, cloves! Truly, our ancestors were men of varied interest and willing to try all sorts of things to earn their living.

We had the privilege to be shown a bloom of the famous delicate pink Mondrain Hibiscus. A mind-blowing event was to be shown a sprig of the “Bois Corail”, native tree of Mauritius. It is the only example in the world, and the only tree left. Much work is being done to multiply it, cuttings, grafts, tissue culture – though I understand that none has been successful to date.

Our next stop was at Chamarel, reached via Mare aux Vacoas and the Macchabe Nature reserve and other Chazal fiefdoms, where Charles Antoine de Chazal lived. His house was not far from the coloured earths, and we were given a full description of the views and farming taking place during the later 19th century in another talk.

Finally we were taken to Case Noyale, for a late and very welcome lunch. Again, we had little talks, this time by Virginia Taylor and various other members of the family, some of them prepared and some off the cuff. It was a delightful day and so interesting. We were able to see so much of the land which was in Chazal hands when the island was colonised.

We were about 30 to make it to Pamplemousses to hear Guy Rouillard’s talk about the family connections to the gardens and food plants growing there. Unfortunately, the fates had other plans and the heavens opened. We were all drenched. We had a small part of the talk around the garden, but Guy nobly decided to abort most of his talk. We were taken to a kiosk for tea and cakes and ended the afternoon huddled under the veranda of Mon Plaisir with Guy doing his best to enlighten us. Well done and thank you, Guy!

Pierre Baissac had arranged for a few of us to visit the Mauritius Commercial Bank and view the original paintings of Malcy de Chazal in their possession. We were received and given a talk by M. Alain Huron, the charming curator of the Bank’s archives. They own many examples of Mauritian art and sculpture, they even own one example of the famous “Blue Mauritius”. It was a delightful afternoon and we felt very privileged to have been asked and been allowed to see original Malcy paintings.

This was the culminating event of the Mauritius Chazfest. It opened with an ecumenical Mass in the “Temple” given by our cousin, Henri Souchon, assisted by Adrien Toulorge.

I was asked to say a few words. The gist of my unprepared “speech” was that it was a pleasure and privilege to stand where our ancestor Edmond held the first New Church meetings on the island, and here we all were, united in love of God and admiration for our ancestors – or words to that effect. I am a great weeper, and found it difficult to speak at times, but many many tearful cousins [both male and female!] came to thank me for my affecting speech. I was very glad that I had been asked to do it.

We gathered for a massive photograph, which may be very good since people were not at all obedient, and the midday light was against us! Photos were taken of all the guests, of some of the guests, of each “coloured” group of the family… I don’t think I have had so many photos taken of me, alone or in a group, even at my wedding!!!

Lunch was in a beautifully decorated marquee, and we were served with delicious food as usual. On each table, were bottles of wine decorated with labels commemorating this historic series of meeting. More speeches, including one from the Ambassador for the US, inviting us to Charlotte where he lives and will be hosting one of the Chazfest events at his house! a tearful goodbye to everyone – or au revoir, since many of us will be meeting again in Charlotte in 2001. What a fabulous week it was. Thank you everyone for having organised such a successful week. 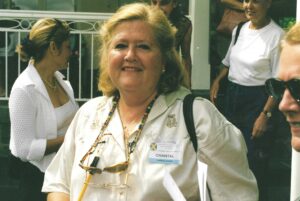 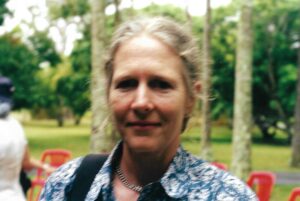 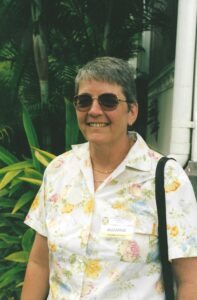 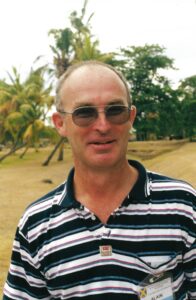 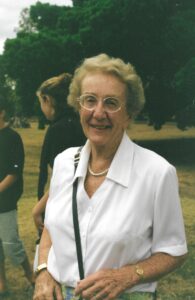 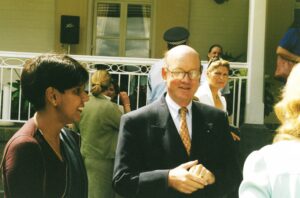 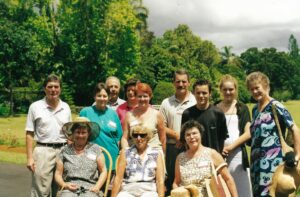 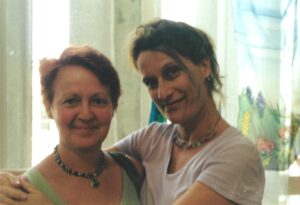 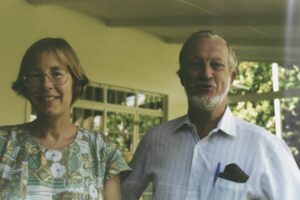 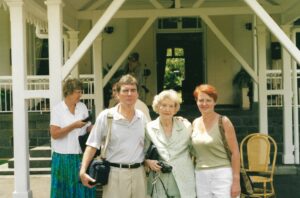 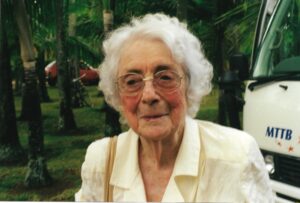 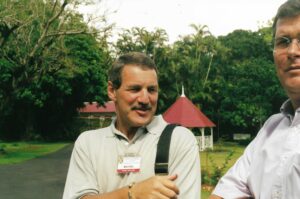 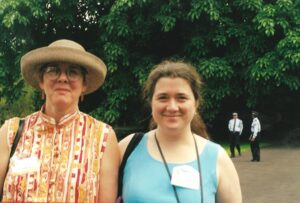