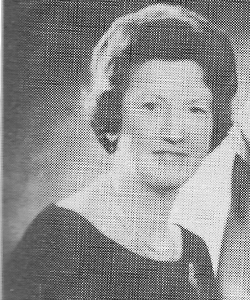 Virginia Rouillard was not only herself but also that unique, particular and significant point where the phenomena of the universe intersect just once and never again. Born during the First World War, she was one of a generation who lived through the Second – and during probably the most tumultuous period in history. Mother was our link between the Family and the old SA, through us to the new generation of her grandchildren and the 21st Century. Her general knowledge of the Family and the South Africa of the past century was immense.

With the writing of her book, ‘Two Families of Ile de France’, she applied her skills as an historian to bequeath us an indelible (and eternal) mark in history, possibly the greatest (and unintended) consequence of which was that it helped to unite the various branches our great de Chazal and Rouillard Families (with their origins in Mauritius) in different parts of the world together. And, in particular, it introduced us to our large extended families of South American cousins in Santa Cruz de la Sierra, Bolivia and San Miguel de Tucuman, Argentina and elsewhere.

When Mother first embarked on the mammoth, 20-year task of writing her book all those years ago, I could never have imagined the astonishing ‘spin-offs’ which it would bring to all of us in the ubiquitous world-wide de Chazal Family!”