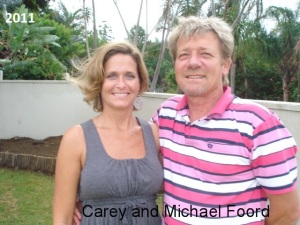 We regret to inform you of the passing of Michael Foord in Durban South Africa. Born on 22nd July 1961, died in June 2011. He was hospitable and would have been much involved in the South African family reunion had circumstances allowed. Our deepest condolences go out to the family. He is survived by his wife Carey whom he married in 1987, they have two children Chelsea and Jordan.