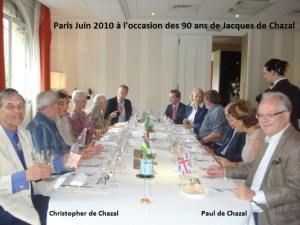 Robin Mayer—I will be travelling with him from England—he is I think descended through Berte. He tells me : « I only know Patrick – my first cousin aged 57. Son of Polo and Annette, grandson of Norman de Chazal Mayer and Yvonne de Chazal Mayer. »

These are the only people I have met. I believe that Pierre Douyere is a cousin of Jean Pierre from Madagascar.

Jacques Poutet de Chazal and his wife are not on Email—they live in Cannes and he is writing an autobiography of his life. I look forward to meeting him if he is there. I have not met him.

This mini reunion of the de Chazal Family and those allied to it was arranged at short notice. Why I am not sure.

Jacques (see the Portrait Gallery page of the website) had very recently celebrated his 90th Birthday, by coincidence it was Robin’s birthday at about this time. Jean Pierre was also in Paris, and last but most important of all—a fact that had not been advised beforehand—was that Jacques had had his official request of name change accepted by The French authorities.
We were therefore privileged to be at a welcome ceremony for Jacques into the Family. Jacques had of course always been a member of The Family. His mother, to whom he was close, was a de Chazal who had tragically lost her life in the last days of the Second World War. Jacques bore his father’s surname allied to “de Chazal”, the fact that he chose to change his name to de Chazal is an honour to the family. 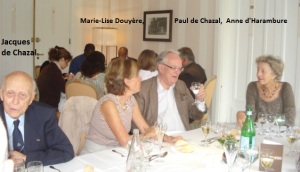 Jacques has written a moving autobiography in aristocratic and flowing French. One day this may appear on the website. Hopefully someone will be able to translate it for our benefit.

Robin and I travelled to Paris for the day. We motored to Ashford and took the Eurostar to Paris and walked to our venue.

A few days after I wrote to Jacques and Simone—see the letter below.

Simone had I think fallen and broken a bone, she was unable to attend the luncheon but some of us were able to spend a few minutes with her after lunch.

Robin and I had such a wonderful time in Paris with you all. We really enjoyed the whole day.

I was delighted to be at what turned out to be a celebration of your birthday and an official welcome to the de Chazal family. I am sure you had no intention of this; it was a pity that Simone could not be with us for lunch but she had no intention of this either. I was pleased to say hello to her, even if it was for a very short time.

Thank you so much for arranging everything at the Cercle National des Armées, it is ideally situated, as Robin and I were able to walk there, and enjoy some of the Parisian atmosphere on the way.

It is very rare for me to have such a prodigious meal and I really appreciated it. I felt that everyone else was happy to eat their food but did they appreciate it as I did? The presentation, the freshness of the ingredients, the skill of the chef to bring out the flavours and colours of each dish, all this things combined with the setting and ambience gave me a lot of pleasure. I can tell you that Thelma has gone out to buy me a fennel and hopes that I will reproduce the “tatin de fenouil”. I must write to you again to tell how it turns out. I am somewhat concerned about it. I have made a tart tatin with apples, I think a fennel tatin must be different, but in what way? 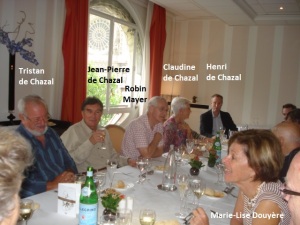 I was delighted to meet Yolaine, I do not think I have previously met her. Did anyone expect Anne d’Harambure to come? I have known her for many years and was pleased to have news of her growing family.

There was a lot of good and bad news. Simone’s indisposition of course but to hear that Bertrand was having such serious operations was surprising; I have written to Annic and will be telephoning his sister Francoise. I heard that Anne’s daughter was engaged, a child is to be born and the generations continue as they have always done. There is nothing surprising about all that but when it is in the family and happening to people one knows it is exciting.