The Communication of Richard Dold.

My uncle Richard Edmond (viz. Dick) Rouillard died on Tuesday in his 80th year. Dick was a grandson of Edmee de Chazal and my mother’s half brother; was the last of her siblings to pass away.

If ever there was a remarkable example of a Rouillard/de Chazal then Dick Rouillard was it! 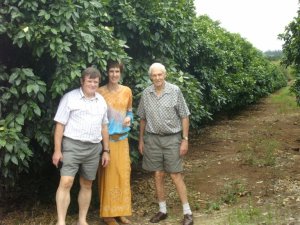 Dear Marieta and all my Rouillard cousins in Pongola,

It was with great sadness that I heard of Dick’s passing away on Tuesday. He played a very prominent part in my life, particularly in my youth; indeed, I spent many of my school holidays at the farm – starting from the age of around 5, I think. In fact, he was virtually a father to me – since my own father was always invariably “absent”.

As a boy, I can well remember the farm during Grandpa and Hannie’s time and even when Dick had not been long returned from university to take up the reins in running it. I also remember that he had won an accolade for his final year university thesis but was, sadly, unable to return to Wits where he’d been invited to make his presentation of it, due to the enormous responsibilities which kept him at the farm. Those were very tough times but Dick’s inimitable capability and determination undoubtedly laid the foundations for the success which the farm now enjoys. The old house, with its paraffin-lamp and candle-lit rooms before the days of the electric generator and its particular style of (French?) antique furniture also brings back many fond memories. Poor RAR was an old man by then; sadly, he was blind in one eye and also increasingly hard of hearing. Mother always preferred to remember their father in his younger days when he had been full of vitality and purpose. I can remember him saying “Dawn’t do that” to us kids in his strong Mauritian French accent on occasion!

Dick was always remarkably tolerant of my many misdemeanours and indiscretions on the farm. It was where I did much of my growing up and naughty pranks and mischievous adventures were the order of the day but he always bore my aberrations remarkably philosophically! I can’t remember him ever getting really angry with me, even though there were times when he probably had good reason to be.

And I also well remember the time when you, Marieta appeared on the scene for the very first time. There was great rejoicing all round; Dick had finally found himself a lovely wife!!

I remember that Dick helped me to win a Mobil Oil essay contest during my matric year; I was one of the two national winners and the prize was a fully sponsored tour of the main centres of South Africa by Mobil. We were hosted in grand style at the main agricultural colleges around the country. It was a magnificent trip and I was most grateful to him for his assistance.

I shall remember Dick as a very likeable guy who had an immense knowledge of most subjects. He was forever good-natured, patient and even-tempered – and I know that he was widely liked in all circles and that all those who knew him, whether socially or in business, always respected his judgement. Like his father, RAR and their many Rouillard and de Chazal forebears before them, he was a pioneer with exceptional vision and energy and he followed him in playing a very significant part in developing the Pongola Valley into what it is today. In this context, I should like to quote a poem called ‘The Pioneers’ by B.Buchanan from Mother’s book on the Rouillards and de Chazals. You may remember it from my tribute at Mother’s funeral but I believe that it is apposite for so many of our pioneering Family forebears who were imbued with hope, vision and dynamism, such as RAR, Mother and Dick.

On every modern luxury there lies

The shade of ancient hardship. He who flies

Across the continent on wings of gauze

Treads the paths of meteors because

His fathers, wingless, earthbound as they groped

Through marsh and jungle upward gazed and hoped.

The cars that roll so ceaselessly today

On velvet wheels along the concrete way

Would find no highways spanning hill and vale

Had not the drudging oxcart blazed a trail.

The deep sadness which we all feel on this occasion may become tempered in due course with the thought that Dick was a remarkable person who was granted an equally remarkable innings. I regard it as a great privilege to have known him and to have been his nephew. I should like to conclude with the words of William Schwenk Gilbert in his beautiful and very moving ballad from ‘The Yeoman of the Guard’:

Is life a boon?

If so, it must befall

That Death, whene’er he call,

Must call too soon.

Though fourscore years he give,

Yet one would pray to live

What kind of plaint have I,

Who perish in July?

(You can find the rest of it in the attachment.)

My thoughts and condolences will be with you all at the funeral and in the coming weeks and With all my love and best wishes, Richard

Is life a boon?

If so, it must befall

That Death, whene’er he call,

Must call too soon.

Though fourscore years he give,

Yet one would pray to live

What kind of plaint have I,

Who perish in July?

Is life a thorn?

Then count it not a whit!

Man is well done with it;

He should all means essay,

To put the plague away;

My life most gladly give —