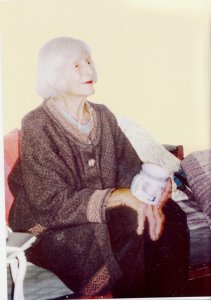 Alix was born on 11th October 1918 in Orange Free State, South Africa. She married Ian Donald on 16th December 1937 in London. He was born on 27th December 1910 in Cornwall, son of John Donald and Helen Burrow Wilson. They have four children.

These bald facts conceal the story of a brave, interesting, strong character the likes of whom will not be seen again.
Alix and her elder sister Ninette were brought up on The Veld, in the almost featureless wilderness of South Africa where The Enterprising went to make their fortune from the land. It was rare that fortunes were made; the work was unrelenting, the landscape dry and barren, the skies big and beautiful.
For the two good-looking and intelligent girls it was paradise, they had constant attention, open space, no manufactured goods or toys, and their imagination knew no bounds. Some today would say they were deprived, but the freedom gave them character.

When Alix was about twelve years old it was recognised that the sisters were special, they were given scholarships it the New Church School in Durban. They quickly caught up with their school mates and Alix passed her Matric exam after only one years study. The New Church (Swedenborg) Philosophy gave then a stable platform on which to build their future.

Ian Donald had fallen in love with Alix when she was a very young girl in South Africa; when she was sixteen he arranged for the sisters to come to England, the romance blossomed and they were married shortly before the Second World War. Tessa was born about a year later, Caroline (Caro) was born soon after the war and then a gap of about seven years when Christina came into the world and about twenty years after Tessa, Margaret (Noggy) was born..

Alix’s husband Ian was an interesting man in his own right and Alix did much to support him in his work. He researched and developed ultrasound for imaging babies in the womb and was appointed Regius Professor of Gynaecology at Glasgow University. He is well known for his text book on obstetrics which is known by students the world over as “THE DONALD”. He had strong views concerning the evil of abortion. Alix travelled extensively with him on lecture tours.
Alix passed away peacefully at the home of Christina in the Orkney Islands, North of Scotland, having three of her daughters around her, Tessa being unable to travel from Norway. The funeral took place in The Orkneys on 24th May and there will be a memorial service on Saturday 13th September 2008 in Glasgow to which all are invited.
Message Added: September 12, 2008