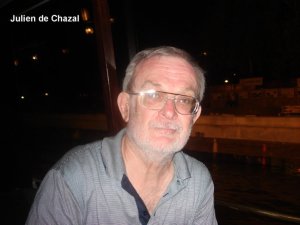 He was born on 13th July 1945 in Floral , Mauritius . He went to the USA to study at The Louisiana State University, Baton Rouge . He obtained a B.Sc. in business administration. He is a bachelor and lives in Australia .

This is a translation of Julien’s entry in the “Dictionaire” in which every de Chazal and many of the de Chazal girls are recorded. Julien has now passed into the next world (6th or 7th Feb 2008 ).

Julien was a private person and as he lived in Australia , so far from Europe , he was able to keep his life from us. He had a good job which he enjoyed and was able to retire at an early age. It was with some surprise and delight that I met him again at the de Chazal reunion held in Charlotte NC. The sense of humour that I remembered from our early days in Mauritius was still with him.

Julien was good at entertaining and he had an excellent cellar in which he took much pride. Soon after retirement he was diagnosed with cancer. The doctors did a great deal for him but he did not have any faith in them. He was able to be at his nephew Richard’s wedding to Paula in Madrid , join the de Chazal reunions in South America and again in France last year. At Rochefuret he was ill and gradually fading and no doubt knew that this was his farewell to the family. It was sad to see him going in this way but we were proud of his fight and his courage of coming to say goodbye—not in so many words, but goodbye nevertheless.

He is really the first of this generation to have lived a life to retirement and then die through ill health; it brings our mortality into focus. His wine cellar is no more: he and his friends drank it with pleasure some years ago when he knew that he would not live to be able to enjoy it for much longer. Julien is not with us anymore but we celebrate his life with us and rejoice that he will find health and joy in the next world.

Julien is survived by his sister Francoise ( England ) and three brothers, Bertrand