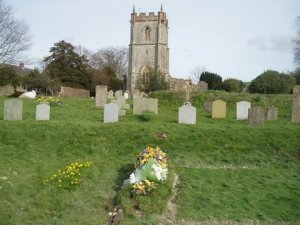 John Robert de Chazal of Sydling St Nicholas Dorset UK died on 23rd March aged 91. Father of Helen, Claire with Winnifred,and Anthony and Edward with Nancy
Anthony de Chazal
The Reverend John Robert de Chazal February 19th 1916 to 23rd March 2007
John>René>Pierre Edmond (who married his first cousin Lucie)> Joseph Antoine Edmond
John’s funeral took place in the local church of the village of Sydling-St- Nicholas in the beautiful county of Dorset. The church was packed and latecomers were left standing.
John was universally admired for his honesty, integrity, steadfastness and generousity. He treated everyone whatever their background or circumstances with equal respect.
The address was given by John’s wife, The Rev Nancy de Chazal, who spoke of their first meeting in Jerusalem.
John’s earlier years as a Police Inspector in India was not emphasised at his funeral. Much of this period is written about in his book “Sunset of The Raj”. There is no doubt that he experienced a very special period of history relative to England and India.
John was buried in the church grounds in a very beautiful setting. The sun shone. The reception was held in the village hall and the family ended the day with sherry, tea and cakes in Lavender Cottage; John’s and Nancy’s home. All these locations are within yards of each other.
John will be greatly missed by his wife, four children, eight grand children and two great grand children.